QUEENS, NY—New York City Economic Development Corporation (NYCEDC), Department of Housing Preservation and Development (HPD), Housing Development Corporation (HDC), and Omni New York LLC joined community members and elected officials in Queens on Wednesday to celebrate the opening of Archer Green, a new 100 percent affordable housing complex to benefit residents and families in downtown Jamaica. The transformational project borne out of the Jamaica NOW Action Plan delivers a 387-unit apartment complex that includes a 15,000 square foot community facility and a 70,000 square foot commercial space, which will be home to ALDI, a low-cost grocery store that will bring high-quality fresh food and produce to the neighborhood.

“Archer Green will create much-needed affordable housing and good-paying jobs, which will help spur a thriving local economy in Jamaica, Queens,” said NYCEDC President and CEO Rachel Loeb. “We thank our city partners HPD, HDC, NYPD, and DCAS, local elected officials, the development team, community members, and all who helped us in reaching this tremendous milestone.”

“What was once an NYPD garage, is now nearly 400 affordable homes, plus a new grocery store and additional retail – yet another example of how the City has been pushing to use public sites to develop affordable housing,” said HPD Commissioner Louise Carroll. “I want to congratulate Omni New York LLC, NYCEDC, and all of our partners for completing Archer Green and delivering on a key commitment of the Jamaica NOW Action plan.”

“Archer Green includes 387 affordable homes - approximately half of which will remain permanently affordable – in addition to a new grocery store, as well as extensive community facility and commercial space,” said HDC President Eric Enderlin. “Congratulations and thank you to all our partners for their efforts to transform this former NYPD parking garage into a vibrant mixed-use development that will significantly contribute to the ongoing economic growth of the Downtown Jamaica community.”

Queens Borough President Donovan Richards and Council Member I. Daneek Miller attended Wednesday's ribbon cutting and spoke about their work to help the project across the finish line.

“The opening of Archer Green is nothing short of a tremendous victory for the families of Jamaica as we welcome nearly 400 units of 100 percent affordable housing, as well as a much-needed grocery store and significant community space, to one of Queens’ most historic and fastest-growing communities,” said Queens Borough President Donovan Richards, Jr. “Archer Green will make a massive difference in the lives of hundreds of Queens families. Congratulations to my predecessor, Melinda Katz, NYCEDC, Omni New York LLC, the Jamaica NOW Leadership Council and all those who played a part in making this remarkable moment possible — Jamaica is a stronger community today because of it."

"Today's ribbon-cutting of Archer Green represents years of hard work and negotiations. We worked to ensure that the development featured 100% affordable units, using all of the tools at our disposal at the Council to secure financing for such a project,” said Council Member I. Daneek Miller. “We appreciate the partnership with the City and EDC to ensure that MWBE participation was a priority for this project, and are incredibly excited about adding more affordable housing to Downtown Jamaica. With the impacts of the pandemic, it's more important than ever that folks have access to apartments like these, which are not only affordable, but offer top-of-the-line amenities as well."

"I am pleased to join the Omni NY team, EDC, HDC, HPD and my colleagues for the Archer Green ribbon cutting," said State Senator Leroy Comrie. "I remember standing with my colleagues at the groundbreaking in 2018, and despite the challenges posed by the past 18 months due to the pandemic, it is encouraging to see that our city agencies continue to find a way to move forward working in collaboration with the private sector to provide much needed affordable housing. The development of downtown Jamaica with affordable housing, a community facility and commercial space is critical to our economic recovery and I commend everyone that took the recommendations of the Jamaica NOW Action Plan and helped make them a reality."

“The opening of Archer Green marks a major milestone in the revitalization of downtown Jamaica. The addition of nearly 400 units of affordable housing, community facility space, a new grocery store, and environmental benefits will be a boon for our community,” said Council Member Adrienne Adams. “As a former Co-Chair of the Jamaica NOW Leadership Council, I am excited that the Action Plan we announced in 2015 is already delivering results and benefits for the residents of Southeast Queens. I want to thank NYCEDC, HPD, HDC, Omni New York LLC, and fellow elected officials for their partnership on this important project."

The residential building includes a variety of amenities such as a fitness room, outdoor terrace, community lounge, children’s playroom, media and coworking space, package lockers, and bike storage. The building will also achieve LEED Gold status and incorporate several green technologies that will improve building operations and increase resiliency, including a state-of-the-art battery energy storage system that can provide back-up power in the event of a black out, solar panels, a Combined Heat and Power (CHP) system that generates electricity and captures heat that would otherwise be wasted, electric vehicle charging stations, and energy efficient appliances and fixtures.

“We are thrilled to celebrate the completion of the 100% affordable housing and mixed-use development that is Archer Green,” said Eugene Schneur, Managing Director of Omni New York LLC. “We want to thank all of the partners and local officials that helped make this project possible, as this new development is bringing much needed affordable housing and economic investment to the center of Jamaica, Queens. We are honored to have been part of these efforts.”

Construction on the project began in 2018 to redevelop the former New York Police Department parking garage and created more than 1,900 construction jobs. It is also expected to create more than 200 permanent jobs.

"We are thrilled to see Archer Green go from a proposal to a reality. The new buildings are beautiful and will make a big difference in this community,” said Community Board 12 District Manager Ms. Yvonne Reddick. “We want to thank all of our partners, city agencies and elected officials for their collaboration and continued support to bring new affordable housing and commercial space to our neighborhood."

"Archer Green demonstrates the great things that come from public-private partnerships," said Justin Rodgers, interim president and CEO of the Greater Jamaica Development Corporation. “The revitalization of this long-underutilized lot begins the transformation of the 168th Street corridor with affordable housing, jobs, community space and retail. Hats off to the City officials and the development team at Omni New York for their great collaboration.” 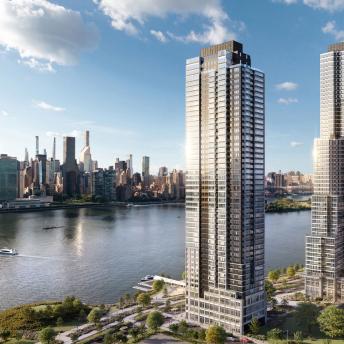 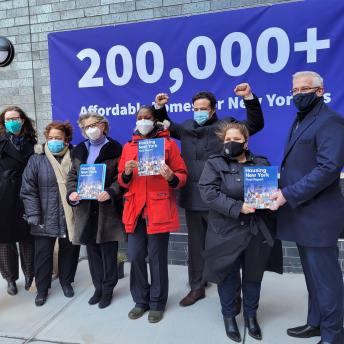 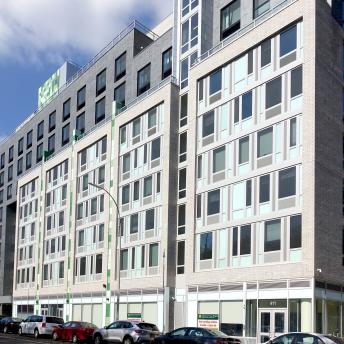