Located at 11 West 118th Street, the nine-story building was developed by Camber in partnership with Harlem Congregations for Community Improvement, Inc. (HCCI), the New York City Department of Housing Preservation & Development (HPD) and the New York City Housing Development Corporation (HDC). Residents began moving into the development in February, though an official ribbon cutting was delayed due to the COVID-19 pandemic.

At the ceremony the development team made a surprise announcement that the building had been renamed in honor of Dr. Joan O. Dawson, the former longtime chair of the Board of Directors at Harlem Congregations for Community Improvement.

“In the wake of the pandemic, the need for safe, secure, affordable housing for our city’s seniors has never been clearer,” said HPD Commissioner Louise Carroll. “Victory Plaza provides more than 130 seniors, including 55 formerly homeless seniors, with affordable homes and the supportive services that they need to thrive. I want to thank HCCI, Camber, HUD, Wells Fargo, and all our partners for working with us to protect our city’s seniors.”

“The opening of Victory Plaza represents our commitment to housing our most vulnerable New Yorkers,” said HDC President Eric Enderlin. “This development will benefit the Central Harlem community for generations to come, with more than 130 homes for low-income and formerly homeless seniors – more than a third of which are permanently affordable. Thank you to all our partners for their dedication to bringing this vital project to completion during these challenging times.”

“Today’s ribbon cutting is a celebration of all the hard work that went into planning and executing this important new development, and I am happy to be a part of it,” said Rick Gropper, Principal and Co-founder of Camber Property Group. “As our city rebuilds and recovers from the COVID-19 pandemic, it is important that we ensure that all New Yorkers—including our seniors—can remain in the city they hold so dear. Projects like the Dr. Joan O. Dawson Plaza represent the future of New York City, and Camber is as committed as ever to that future.”

“Victory Plaza Senior Housing is the second phase of Harlem Congregations for Community Improvement, Inc (HCCI)'s Victory One, as a Senior resident campus located in Central Harlem originally developed in the 1990s as a 110-unit senior building,” said Dr. Malcolm A. Punter, HCCI President & CEO. “The ribbon-cutting ceremony for Victory Plaza marks a tremendous victory over the lack of affordable housing for seniors in the Harlem community, triumph over the Covid-19 pandemic, and the necessity of social services which will be provided by HCCI to eliminate chronic homelessness amongst very low-income senior residents. HCCI in partnership with Camber Property Group, HUD, HPD, DHS, and our local elected official believes the Senior Affordable Rental Apartment (SARA) model will work well to continue to provide affordable housing options in the Harlem community.”

“For years, we have focused on the widespread lack of senior housing as one of the major crises facing our community,” said City Council Member Bill Perkins. “However, I would say that the crisis is not just the lack of housing for the elderly; it is a lack of housing that people can really afford. The Senior Affordable Rental Apartments (SARA) program at Victory Plaza addresses this crisis. Therefore, we are pleased to be a part of the SARA program as it has built 136 100 percent affordable housing units for our senior community in my district. We are particularly excited that this program aims to maintain and preserve 100 percent of low-income housing, as shown by the newly constructed affordable senior building at the Victory Plaza. The SARA program is a model that we can all welcome into our community and we look forward to similar projects, coming from the association of Camber, the Harlem Congregation for Community Improvement (HCCI), the New York City Department of Housing (HPD) and the New York Housing Development Corporation (HDC).”

The $65 million project was financed by HDC, HPD and Wells Fargo, and was designed by Aufgang Architects.Amenities available to residents at the Dr. Joan O. Dawson Plaza include a landscaped outdoor recreation area, fitness center, programmed community space, laundry and bicycle parking.  The building will feature on-site wraparound social services, provided by HCCI, addressing areas such as financial security, health and wellbeing and isolation prevention. 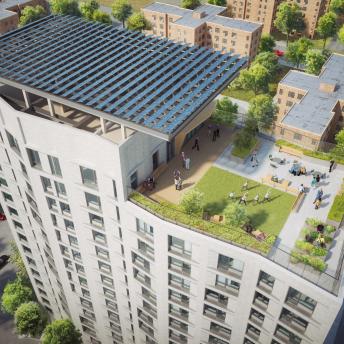 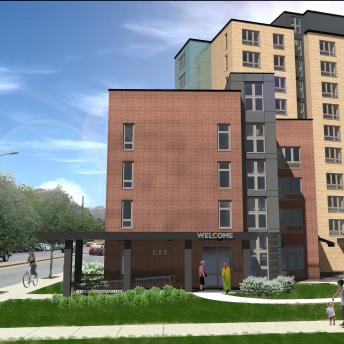 Press Release
Recovery For All of Us: City Finances Most New Construction of Affordable Housing Ever
Jul 27, 2021