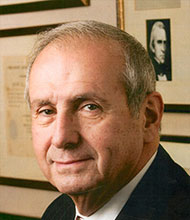 HARRY E. GOULD, JR., Vice Chairperson and Member, serving pursuant to law. From 1969 to May 2015, Mr. Gould served as Chairman, President and Chief Executive Officer of Gould Paper Corporation. He was Chairman and President of Cinema Group, Inc., a major independent film financing and production company, from 1982 to May 1986, and is currently Chairman and President of Signature Communications Ltd., a new company that is active in the same field as well as providing consulting services in M&A, “turnarounds,” manufacturing and distribution. Mr. Gould began his career in 1962 in the Corporate Finance Department of Goldman Sachs. From 1964-1969, he held senior operating positions at Universal American Corporation, an industrial conglomerate that merged with Gulf + Western Industries at the beginning of 1968. At the time of the merger, Universal American was ranked 354th on the fortune 500 List, while Gulf + Western ranked in the top 75. He is a Life Member of the Executive Branch of the Academy of Motion Picture Arts and Sciences.